Matt Wilhelm has won three X Games medals and silver and bronze medals from the World Championships. He now has a Guinness World Record to add to his resume.

Watch the Record Below 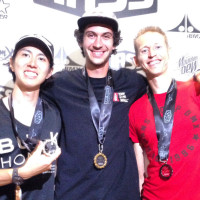